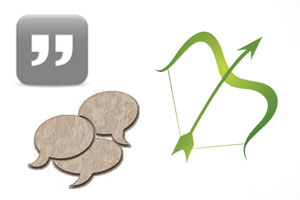 Restless souls, which Sagittariuses usually are, belong to intelligent, smart and observant people. No wonder that many of them succeeded as politics, writers, or poets, and wrote down their thoughts. Below we present some of the famous quotes by Sagittariuses.

“As all the perfumes of the vanished day
Rise from the earth still moistened with the dew
So from my chastened soul beneath thy ray
Old love is born anew.”