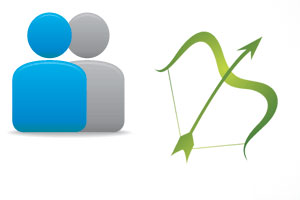 People of Sagittarius are honest, open, impulsive, impatient, but also kind, active and generous, loving the nature, people, and the world. They are active, but also able to observe the surrounding and draw correct conclusions of it. They like to meet new people, value contacts with friends and are usually up-to-date with their life situation, so they have predispositions to become teachers. In this profession, they usually act like Socrates – teach how to draw conclusions and look at the world critically.

It’s worth remembering that Sagittariuses are tough opponents to argue – their defend their opinions firmly, fight with false accusations and suggestions, usually have strong arguments and chose them wisely to get to their interlocutors. Apart from being a good teacher, Sagittarius will also be a good lawyer, journalist, philosopher, historian or literature critic. Thanks to being intuitive and foreseeing, they will also succeed as scientists or professors. They are not prone to other people’s opinions and rarely change their own. They know what they really want and strive for it, are not afraid to take risk, but happen to be hasty, especially when they let the emotions rule over sensibility.

The biggest disadvantages of all people of Sagittarius are sharp tongue and tendency to reveal secrets, which is caused more by talkativeness than bad will. They always want to do more than they are able to, that’s why they often do a few things at once.

However, they have many more advantages – they are honest, can dedicate themselves to others, are just, hard-working, lively and open. They defend their opinions and are not afraid to doubt common beliefs, especially when they think that they are useless and untrue. They love animals, especially dogs and horses, and are very active and curious since early age. They need space to have their fling. 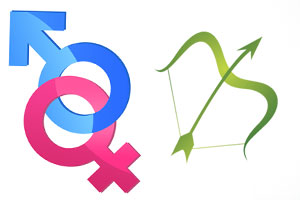 She-Sagittarius is a happy, sociable, open and lively woman. She hates lies and values truth. She is rather direct and honest herself, and always tells what she really thinks, even if it’s painful. She lives an interesting and various life, enjoys every good moment, but bear failures and disappointments uneasily. She likes to flirt and is changeable, it takes her long to find a partner but when she eventually does, she will be a true companion of life.

He-Sagittarius values his freedom and pride, that’s why he always defend his opinions restlessly, which is characteristic for every Sagittarius. He is exceptionally intelligent and creative, impulsive in acting, but egocentric in love. Although he is rather well-liked, he can be really unpleasant. He happens to be difficult in relationship, spending more time for social matters and meetings with friends, which may make his partner feel marginalized.